Last month five of us – Rob and Thomas Renner, and Scott, Maggie, and Sander Johnson – from Grace OPC in Wasilla flew south to New Bern, North Carolina, to take part in the OPC’s ongoing Hurricane Florence relief work. Since Fred de Ru, a deacon of Grace, is the site manager in New Bern, the work was truly an Alaskan endeavor.

Though the reason for our volunteer work there was tragic, a devastating hurricane that destroyed property and upended lives, it was a blessing for us to spend time in New Bern and make a small contribution to that community’s recovery. We very much enjoyed meeting and getting to know the brothers and sisters at Covenant Orthodox Presbyterian Church in New Bern, and the people on whose properties we worked. And seeing Fred and Brenda was icing on the cake. I think we were more blessed than what little good we could do for the people there in so short a time.

Here Thomas, Sander, and Maggie patiently wait for our rental car at the Raleigh-Durham airport. Four adult-sized bodies (Rob joined us later), heaps of baggage, and a small sedan made for a very cramped two and a half hour drive to New Bern. 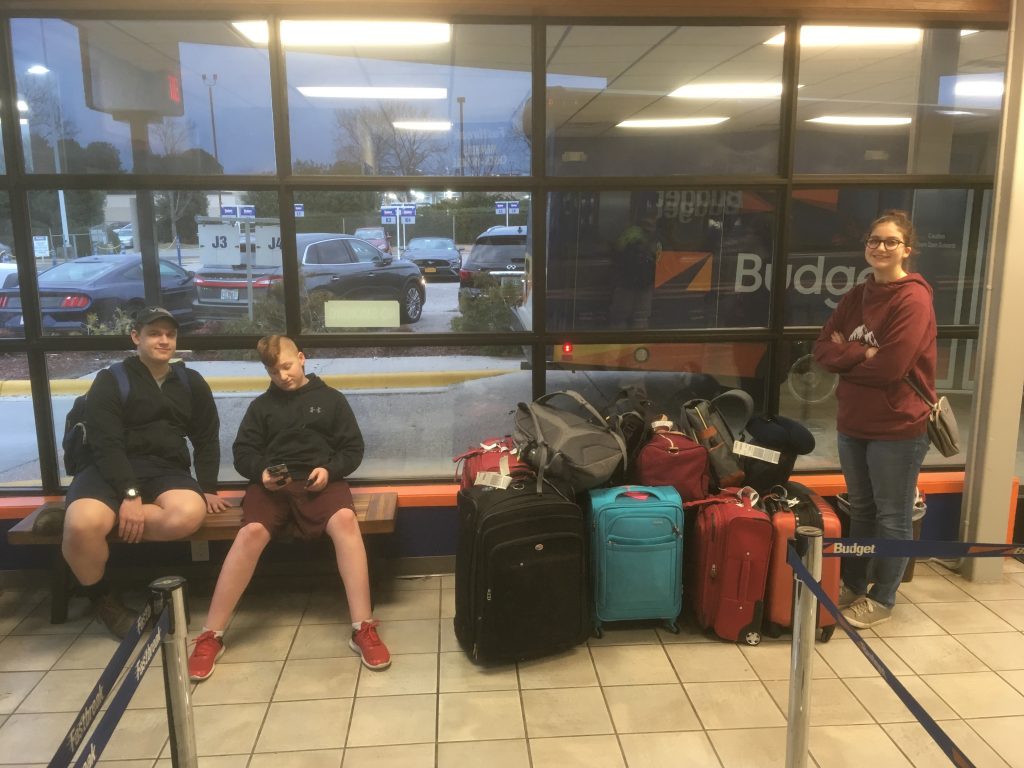 Here Maggie stands in front of a trailer full of debris that we loaded and strapped down to take to the landfill. This house belongs to the father of a church member in New Bern. Previous workers had already gutted the interior; we just hauled away some of the leftover debris. 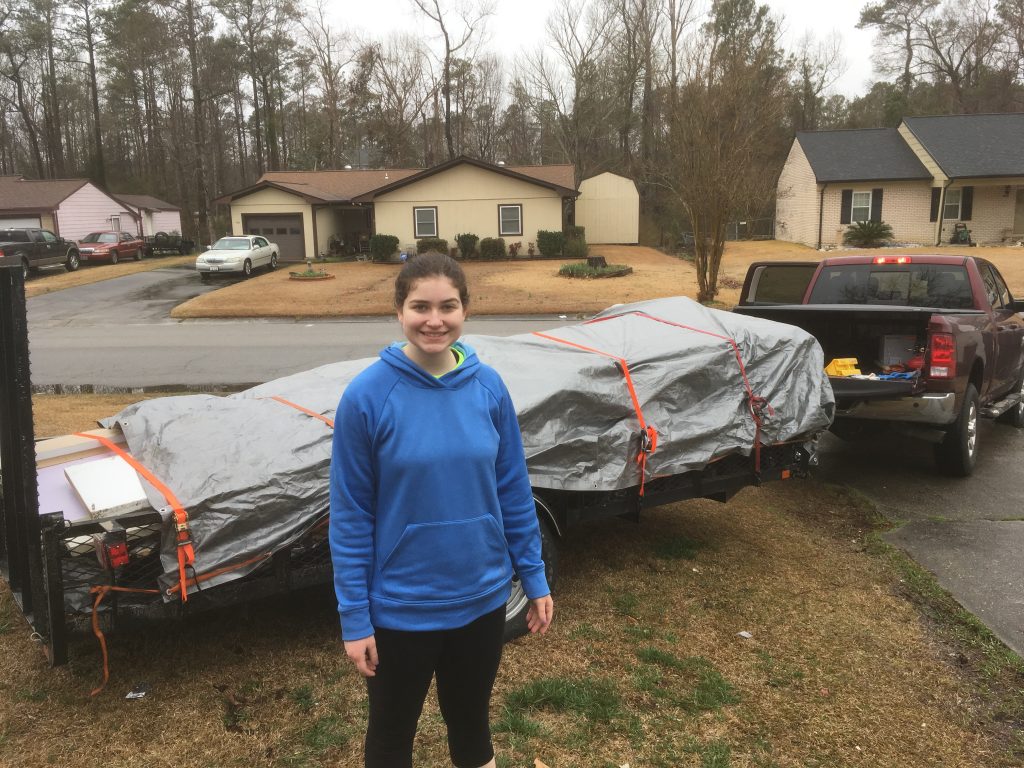 We spent some time at this lovely location – the landfill in New Bern. I hadn’t seen so many seagulls since the last time our family went dipnetting on the Kenai River. The stench of methane gas was almost nauseating. Because of the rain, the ground under us (trash and dirt) was very soft. The lady at the weigh station said we were lucky not to get our vehicle stuck in the mud. But we know it was God’s grace that kept us from sinking into this “slough of despond”! 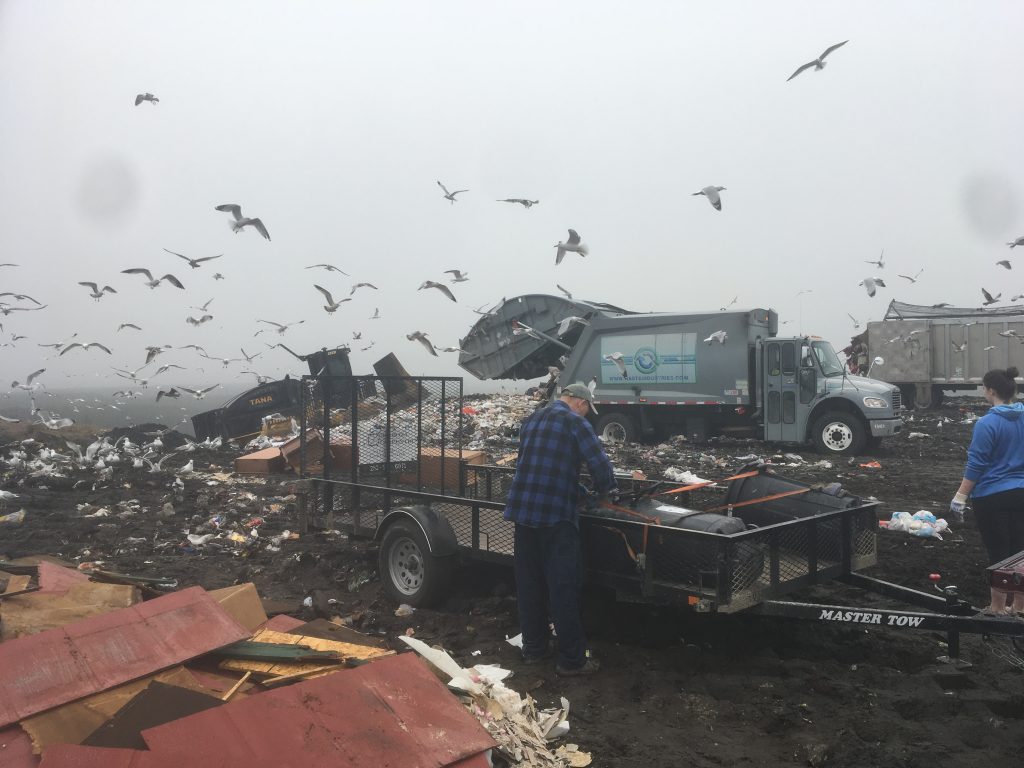 “Thomas and Sander, tear down this shed and burn up the pieces!” What young man wouldn’t want this assignment? This shed, and the one in the background, were damaged when a tree fell on them both. The further shed is repairable; this one was not. This property belongs to a member of the New Bern congregation. 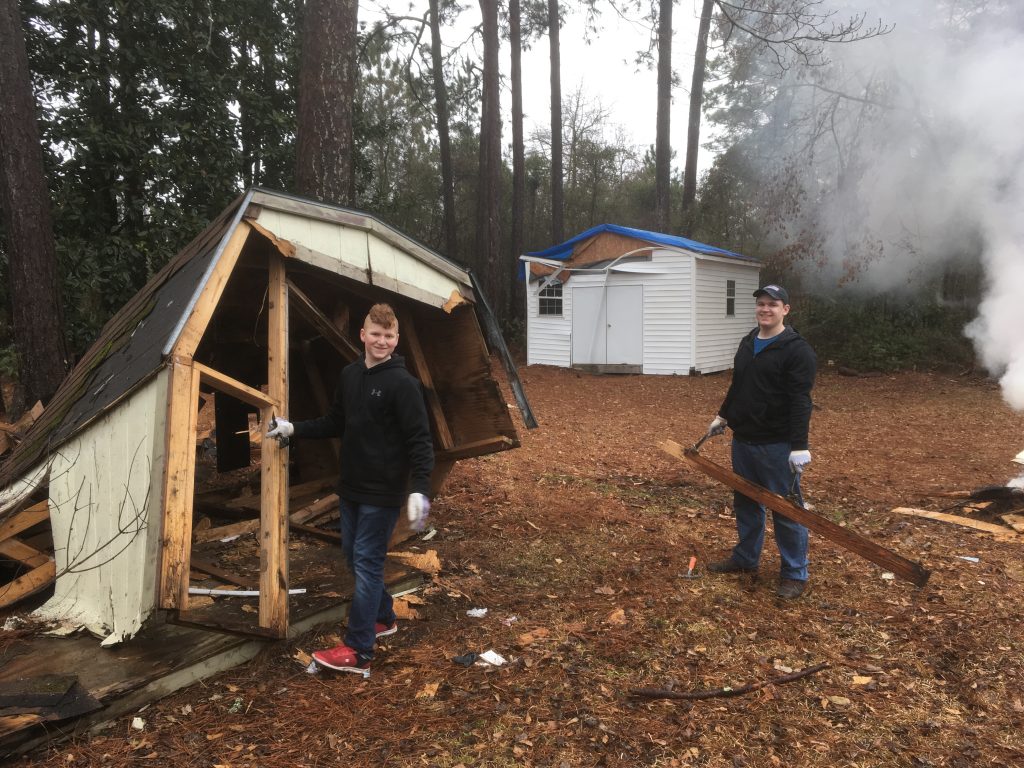 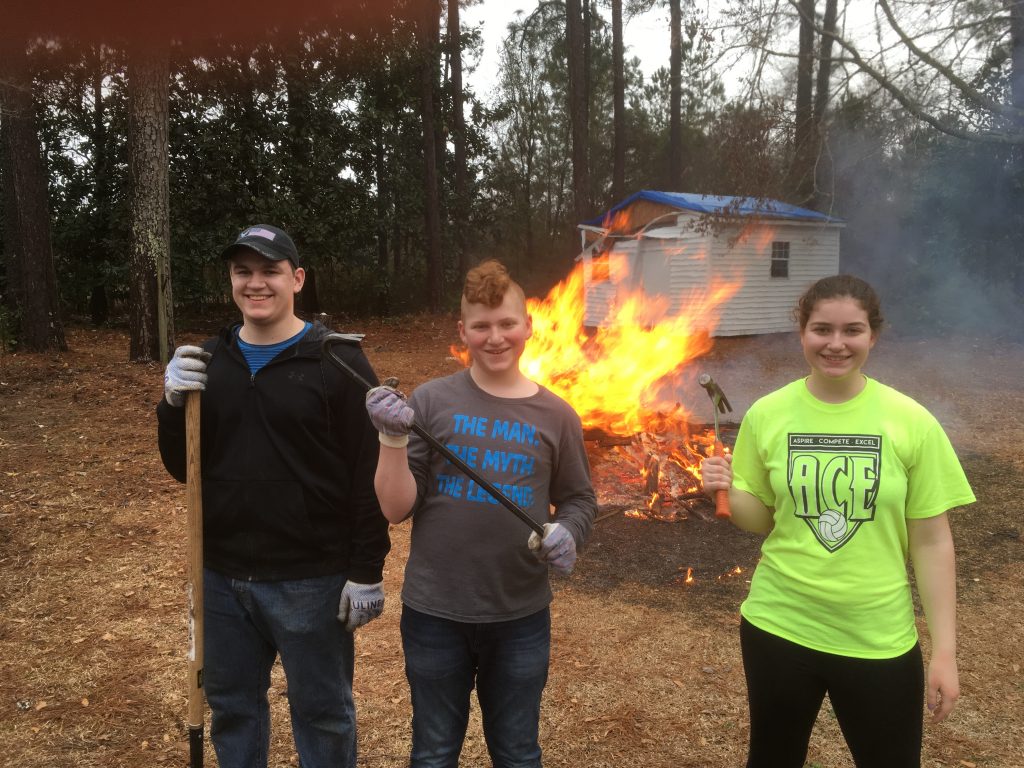 Here Fred is consulting with Jim, a member of the New Bern church. Jim has devoted much of his time in the relief efforts. As we were working here, a neighbor came by and chatted for a few minutes. Fred took the opportunity to pray with him. This is part of the ministry, finding ways to point those who are helped towards the Savior in whose name we serve. 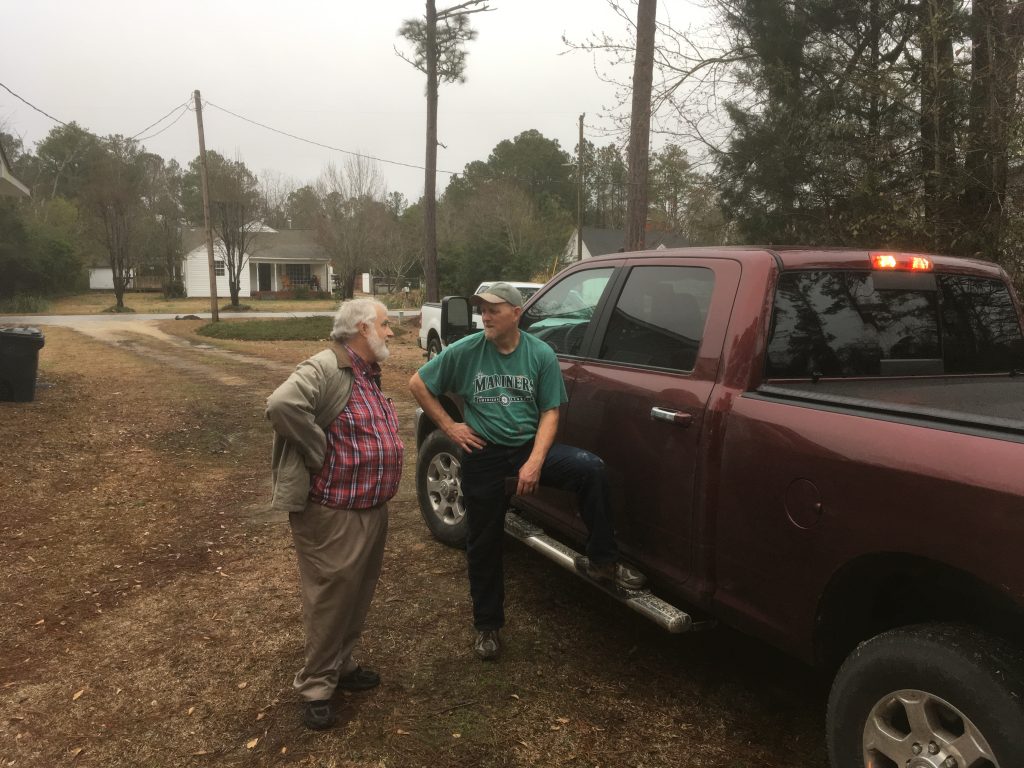 We spent a day and a half taking most of this pile of debris, trailer load by trailer load, to the landfill. What didn’t go to the landfill we burned in a firepit at the church. What we didn’t burn there was left over for firewood for a church family. The floodwaters came up to about where the base of this pile was. I was able to pray with some of the neighbors at this work site, which was a blessing for me. Maybe some gospel seed was planted by that little witness? We trust that God is working through Fred and his volunteers to accomplish an even greater purpose than hurricane relief. 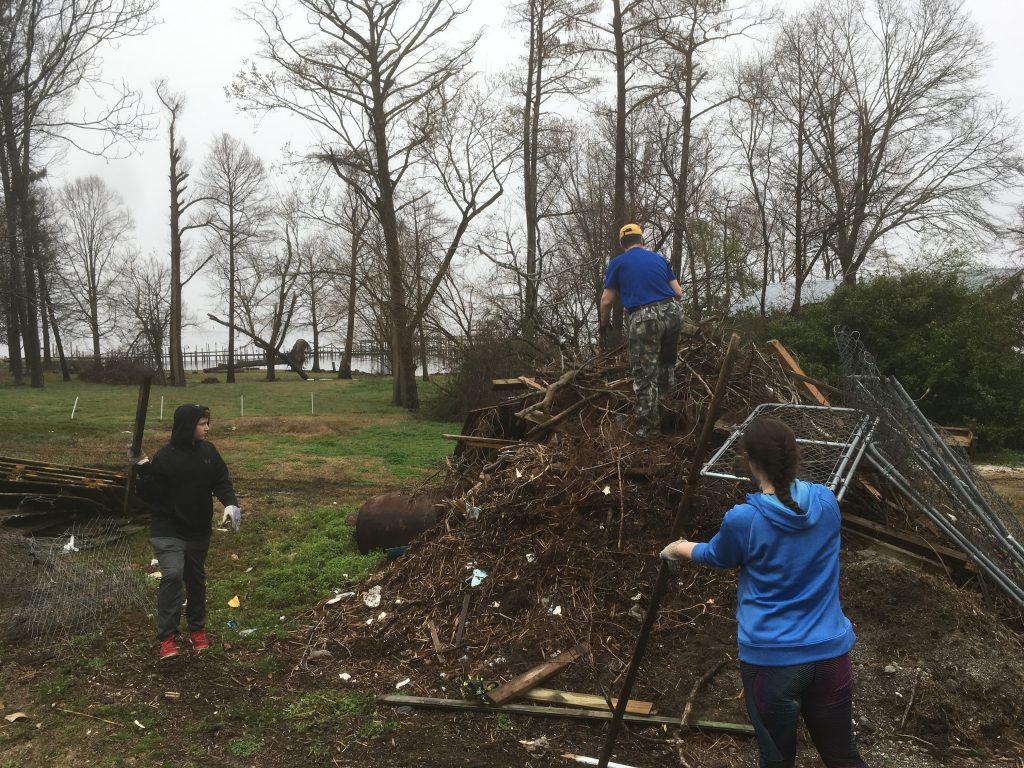 Removing the debris pile meant making many little creatures homeless: frogs, mice, lizards, and snakes. Here Rob is showing the kids a snake we found. Was it one of the poisonous Copperheads we were warned about, or just a harmless garden snake? Google didn’t help. Let’s go with the Copperhead. 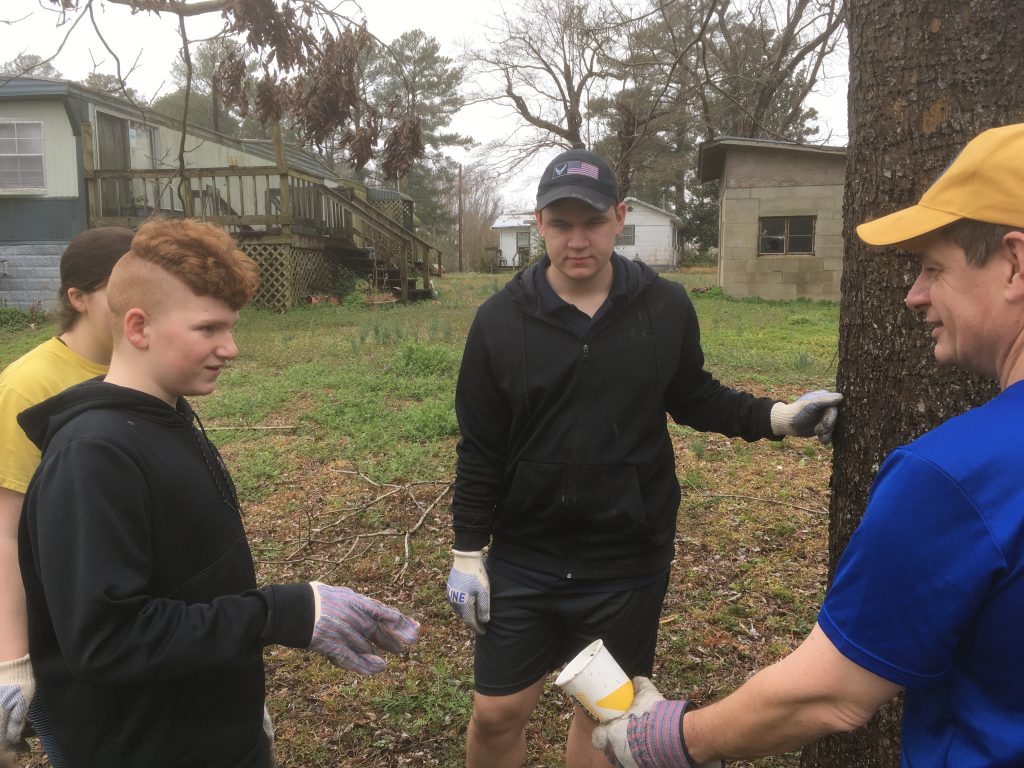 Sander “kissing” a frog, hoping for a… beautiful princess?

After lifting and loading trailer-loads of wood, fencing, and assorted debris, the pile is gone! The homeowner was very appreciative. 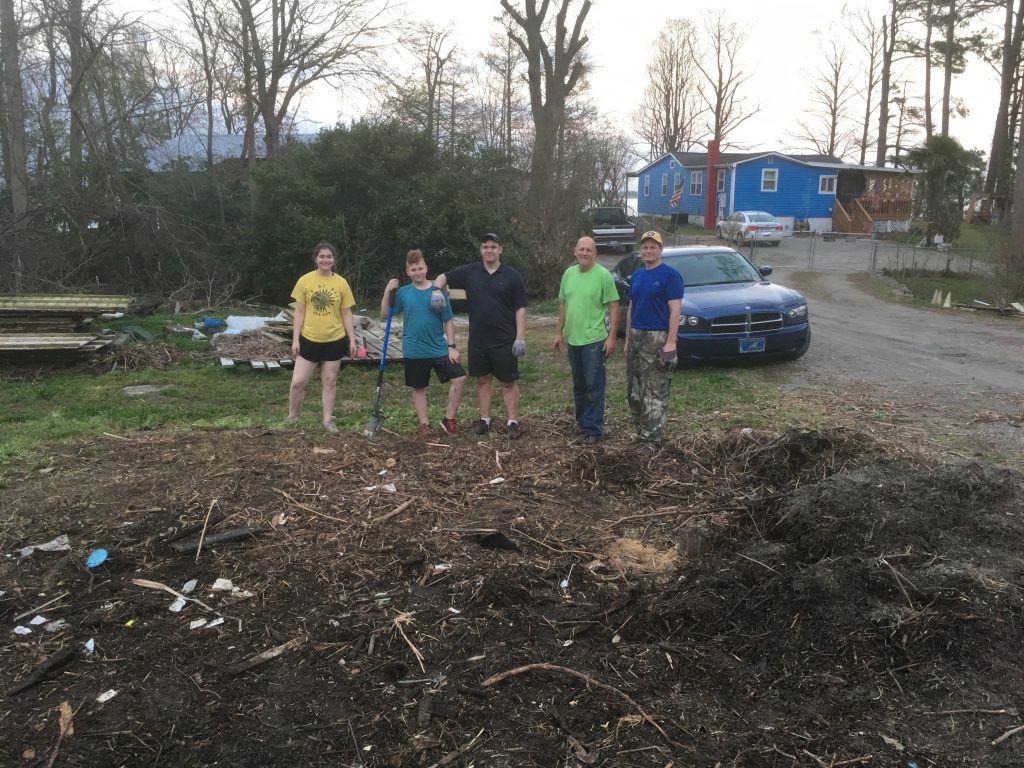 We’re more used to snow removal up in Alaska, but I’d say we did a fine job removing this pile. 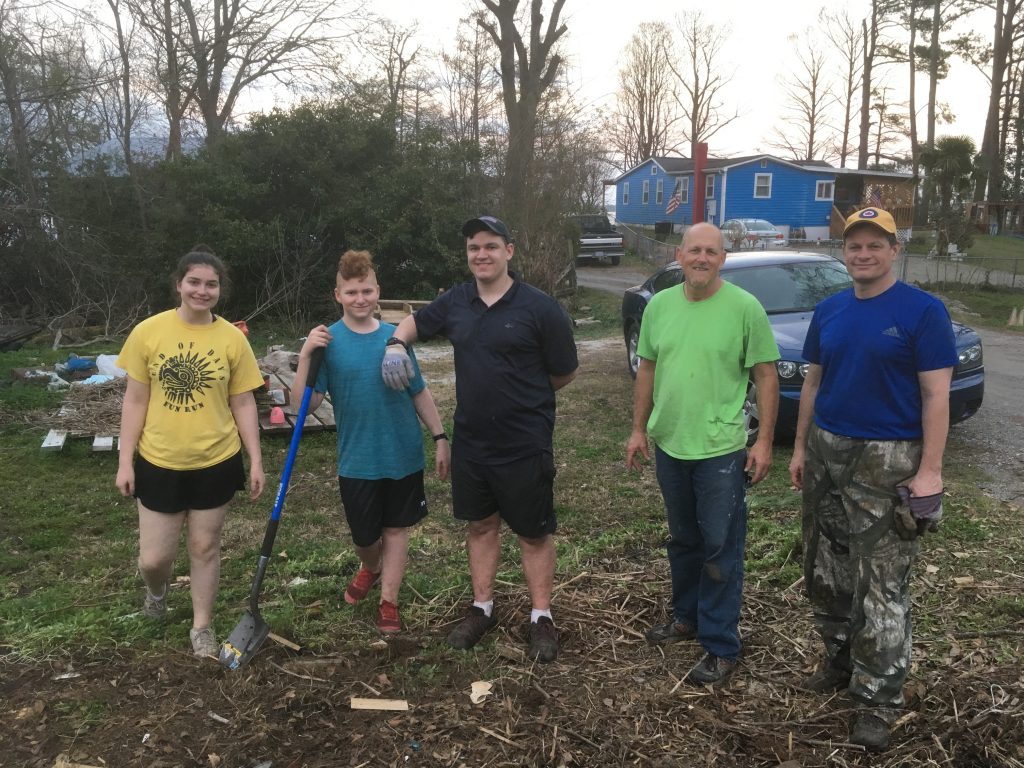 The man in the center is named Stan, and he’s a member of the congregation in New Bern. On his left is his adopted son Rick, who lives next door. Stan’s house was damaged when more than one tree fell on it during the hurricane. He had contractors remove the trees and fix the roof. But they only removed the trees to the property behind his house. So they needed to be disposed of. We sawed the bigger pieces and set those aside for firewood. The branches we burned in two little bonfires. We also had good conversations with Rick, who struggles to believe in some of the biblical teachings regarding God’s attributes. 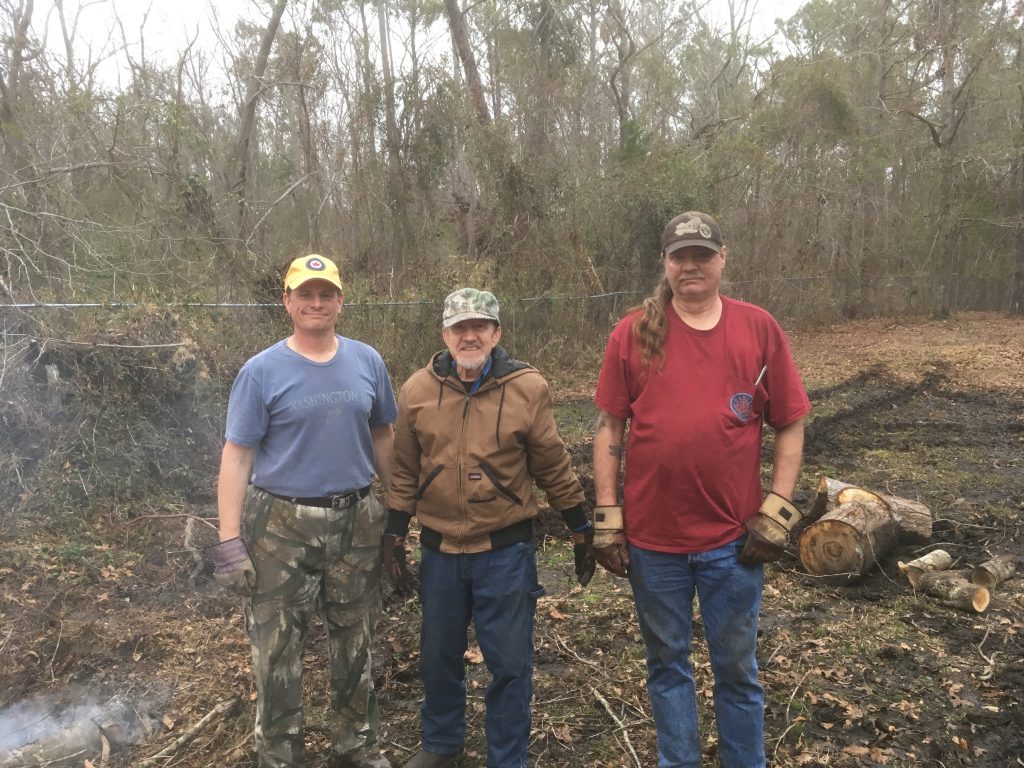 I enjoyed running a chainsaw for the first time. Since I’ve seen the professional logger show at the Alaska State Fair a few times, I knew exactly what I was doing. Actually, thanks to Fred’s excellent safety briefing, I managed to saw logs for a couple of hours while leaving all my digits and limbs intact. Again, God’s grace. 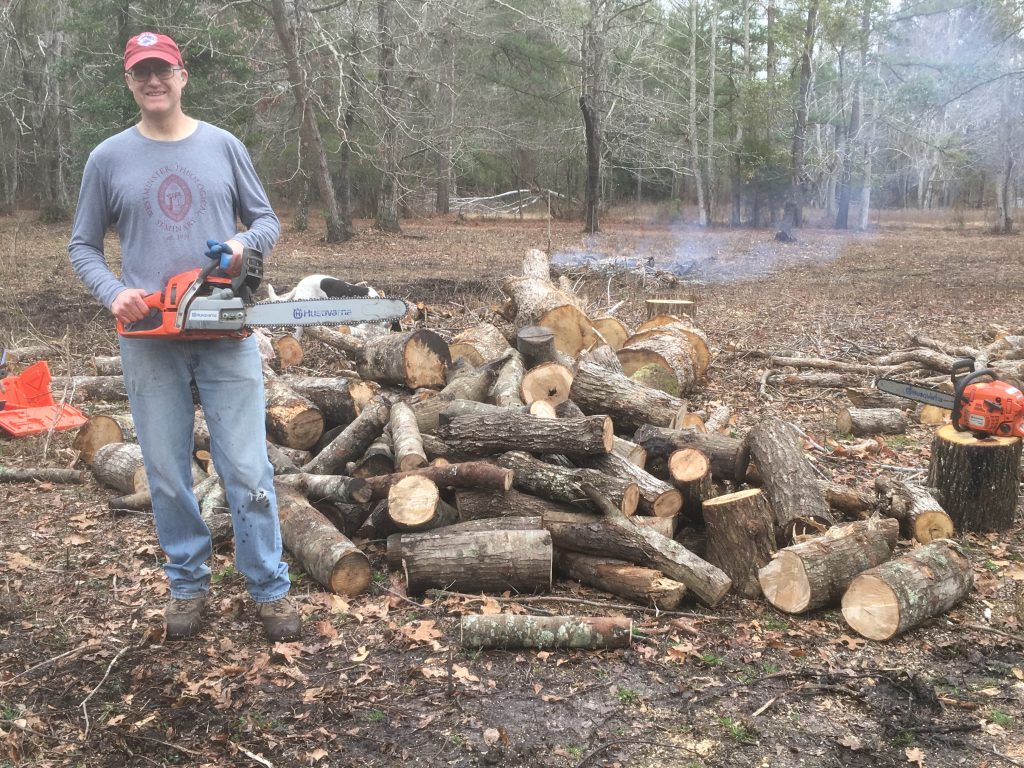 To be honest, we were hoping for more beach-like weather for our one brief visit to the beach. But at least the wind and cold made us feel right at home. Notice Sander’s “Pepsi-Cola” sweatshirt. Did you know that Pepsi was invented and first sold at a little drugstore in downtown New Bern? Neither did we; an added bonus to the trip. 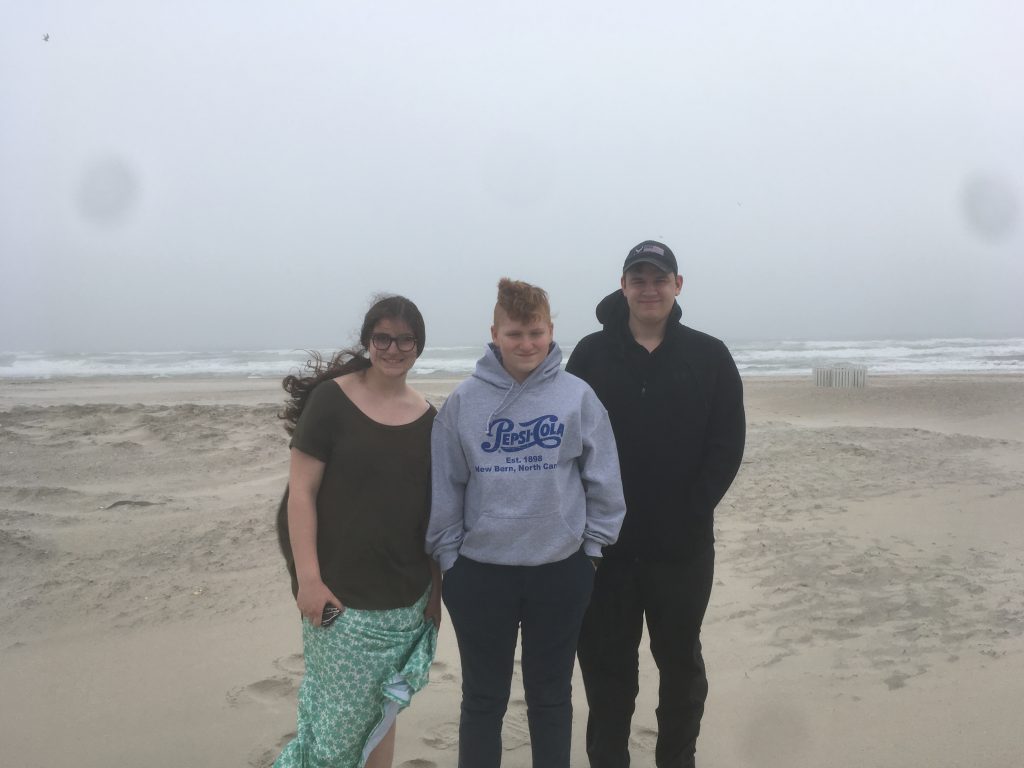 “Home Sweet Fifth-Wheel.” Fred and Brenda in front of their rig near New Bern. We sure miss them. I told them we tried our hardest to get an OPC disaster relief work going up here in Alaska so they had to come back. But I guess a 7.1 magnitude earthquake just wasn’t enough. 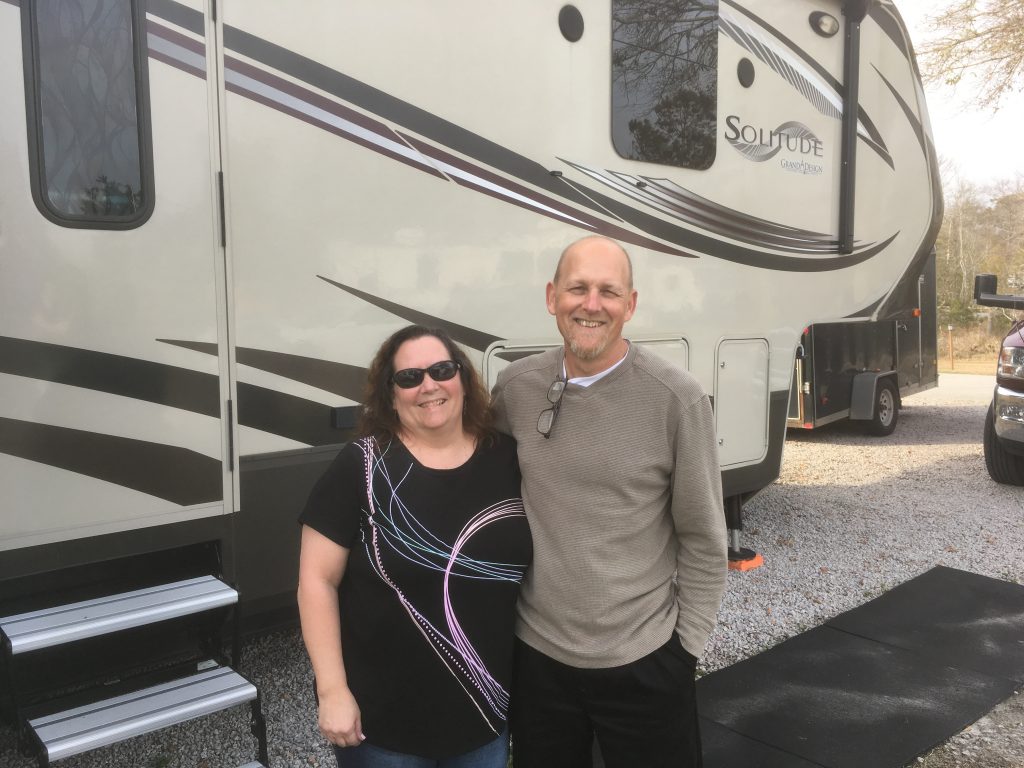 The hospitality of the families of the New Bern church made us feel warmly welcomed. We were treated to a hot dinner each night provided by a church family, and on Sunday we were invited to church member Bernice’s beautiful ocean-side house for great food and fellowship. I hope we do come back some day! 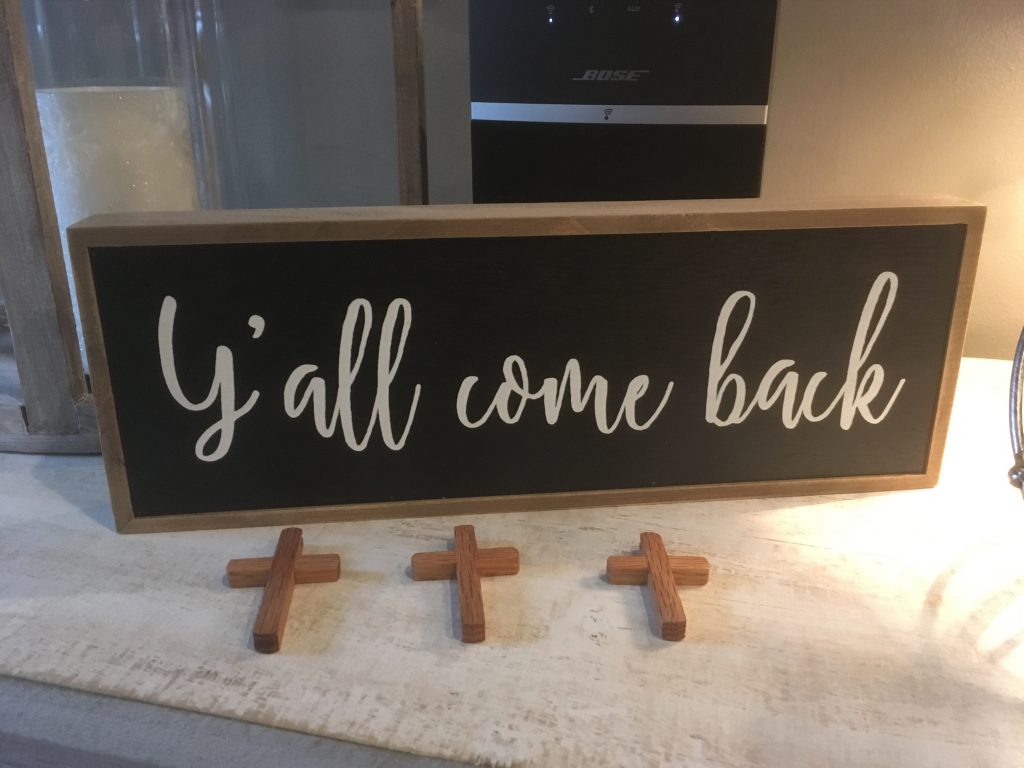