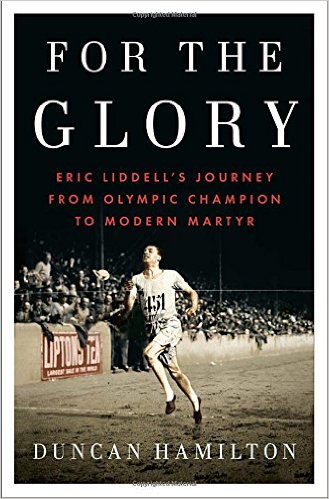 Even with the media overhype, the doping scandals, and the opening ceremonies’ Tower of Babylon-esque aspirations of world unity through sport, the Olympics still have a certain appeal. For a couple of weeks every two years, the playing field of sports is leveled. A NBA star may rake in millions a year, but his gold medal is no better than that of the 19-year college kid who shoots the best air rifle. And when else but during the Olympics do my kids care about water polo? I’m glad the unknown and unpaid athletes get their day in the sun.

So I’m still a fan of the Olympics. As it happened, I began reading Duncan Hamilton’s For the Glory before this summer’s games began and I finished it last night with one eye on the swimming finals. For the Glory tells the story of Scottish runner Eric Liddell, who won gold in the 400 meters at the 1924 Paris Olympics. His enduring Olympic fame, however, is because of the race he did not enter – the 100 meters. This was his strongest distance and had the race been run on any day Monday through Saturday, Liddell would have raced and probably won it. The problem was the heats took place on Sunday. A devoted Christian, Liddell refused to compete on Sunday because of his conviction that Sunday is the Lord’s Day, the Christian Sabbath, and therefore a day of rest and worship. If you’ve seen Chariots of Fire (and if not, you need to) you know the basic story. Despite intense pressure to compete on Sunday, Liddell obeyed his conscience and refused. He then went on to stun the world by winning the 400 meters in record time, a race he had barely trained for.

This is the Eric Liddell story familiar to most people. But the story of Liddell’s post-Olympic life is even more compelling. And Hamilton does a fine job telling it. After the Olympics, Liddell set off for China for missionary service, leaving behind what could have been an Olympic champ’s life of comfort and fame (not to mention certain future Olympic success). Instead, out of his desire to serve Christ, he chose the anonymity and adversity of service in a faraway and dangerous place. And there he lived, first freely and then as a prisoner of a Japanese-run internment camp for foreigners until a brain tumor took his life in 1945 at the age of 43.

Hamilton’s portrait of Liddell is extraordinary: a man of impeccable character and remarkable humility who devoted himself to serving others. The author may or may not share Liddell’s faith but his admiration for his subject is nearly boundless. Liddell must have been a special man, a Christian whose integrity, courage, selflessness, and love left an indelible impression on all who met him. Reading this biography made me wish I could have met him. At any rate I was humbled when I compared my own life with his.

And I was encouraged, encouraged by the example Liddell set. First, the Sabbatarian in me loves Liddell’s unflinching refusal to compete on Sunday in the Olympics. For him it was a matter of simple obedience to Christ. In his words, “each one comes to the cross-roads at some period of his life and must make his decision for or against His Master” (pg. 72). If Sunday is truly the Lord’s Day (Revelation 1:10), it is tragic how lightly the church today treats it. We could use a few more valiant Eric Liddells who are unwilling to surrender to the world the one day God claims for himself.

I was also encouraged by the Christ-like example Liddell set. Hamilton explains how the Sermon on the Mount was especially influential for Liddell. He seemed to be a man preeminently occupied with emulating the example of Christ in his everyday life and interactions with others. While Jesus is first of all our Savior from sin, he is also our example on how to live. Too easily I excuse my own un-Christlikeness by telling myself I am saved by grace. Which is true, but the same grace of God that saves me compels me to pursue greater conformity to Christ. I was impressed by Liddell’s devotion to be like Christ, and convicted of what is, in comparison, my own complancency.

I’m grateful for this book about Eric Liddell and I hope it will inspire in others to share in the author’s unabashed admiration for the man. Even more, I hope the story of Liddell’s life will inspire others to seek the One he served.