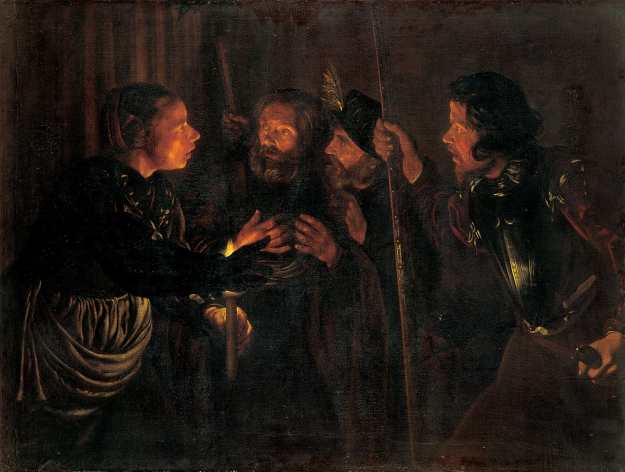 I don’t mean to pick on Peter but something I read in one of my commentaries on John’s Gospel (namely, that by Herman Ridderbos – dense but wonderfully insightful) helped me see Peter’s denial of Jesus in a brand new light.

We typically chalk up Peter’s dismal failure to confess Christ before his questioners to the fear of man. And I believe there’s no question that was a primary factor for Peter’s three-fold denial. Peter had courage in spades but he clearly lost his nerve when to affirm he followed Jesus meant risking his safety or even his life (of course the Peter in Acts is a different man – an utterly fearless preacher of Christ).

But was there a contributing factor to Peter’s denial? Ridderbos makes the point that Peter still hadn’t accepted the true nature of the way in which Christ would establish his Kingdom. Though Jesus had repeatedly taught his disciples he must suffer and die (and was once foolishly rebuked by Peter for such talk), to the very end Peter failed to grasp that the Christ could not enter his glory unless he first humbled himself, even to death. This is why, when Jesus dressed himself like a slave and began to wash the feet of his disciples, Peter would have none of it: “You shall never wash my feet!” (John 13:8). This was no way for God’s Messiah to act! And later that night in the garden, Peter literally violently refused to see Jesus taken away by the Roman soldiers and armed officers sent by the Jewish leaders. No way was he going to allow such a disgrace! Nobody binds God’s chosen King! A certain Malchus lost his ear to Peter’s sword before Jesus put a stop to his folly.

Peter’s problem was his faulty theology. His idea of Christ and the reign of Christ included only glory and triumph. Notions of a humble, servant-like Messiah, or a suffering Messiah, were as scandalous as they were virtually incomprehensible. And a Christ who would die the cursed death of crucifixion? Utterly offensive.

For this reason, perhaps, Peter had no more bravery left in him as he stood in the high-priest’s courtyard warming himself at the charcoal fire. He was fiercely loyal to Jesus, but could it be that then all his dreams of the glory and reign of Christ vanished like the smoke of the fire disappearing into the cold night? Was he more than merely afraid of his questioners – but also disillusioned, dispirited, and disabused of his Christ fantasies?

At heart, Peter failed to believe all that Jesus had taught him concerning his Kingdom – that the Scriptures and the will of his Father constrained him to humble himself, and to suffer and die. Peter denied Jesus that night because of this unbelief. The greater story, of course, is the love and mercy of Jesus who later restored him to himself.

But if Peter’s denial of Jesus stemmed from his bad theology – really, his unbelief – we can learn from his failure far more than the need to fear God over man. We need to know that, although the Christian life is one of joy and blessing, following Christ means walking in the path of humility, suffering, and dying to self. We should expect in this life disappointment, sorrow, frustrations, and inexplicable turns of events in God’s providence. Lest like Peter, we become so disillusioned when our Christian fantasies disintegrate, we fail to own Jesus as our Lord.

Will you confess Christ when there is no earthly gain from it? Will you own him even at times when it seems God has given you nothing but grief and pain? Confess him now in this sad world, in the midst of defeat and suffering, and he will confess you before his Father in heaven when he returns – this time in triumph and glory.