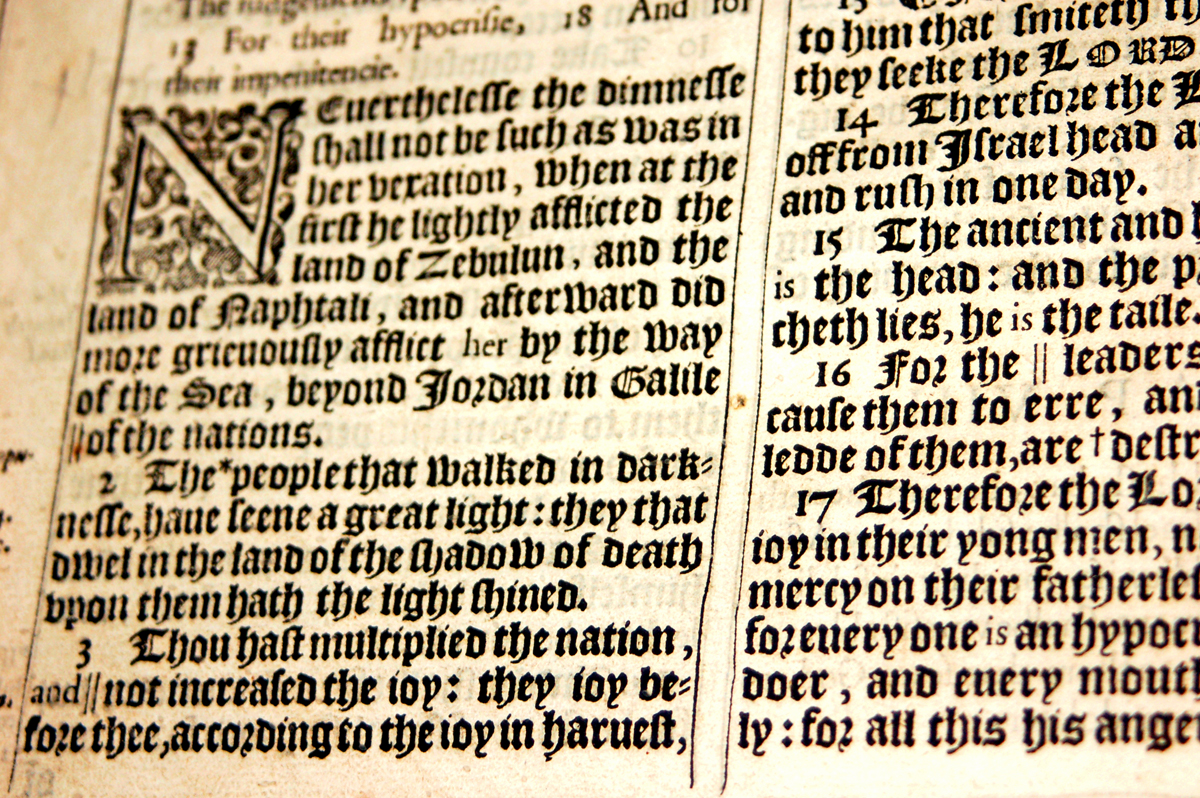 The Bible has fallen on hard times. Not so long ago, most people more or less agreed that the Scriptures were special, that they possessed an unique authority as the Word of God. Not everyone believed, of course, but the prevailing consensus at least upheld the idea of the Bible as a divinely-given book.

Things are different today. Not only are most people sadly ignorant of what the Bible says, but the notion that Scripture is inherently authoritative sounds increasingly far-fetched in a highly secularized culture. Scholars with imposing credentials assure us the Bible is a merely human product, at best the pious imaginings of ancient people trying to make sense of their world in a pre-scientific age, at worst the work of power-hungry men who used such (so-called) sacred writing to impose their control over others. And in the public square, in debate over matters of great moral concern such as abortion and gay marriage, any appeal to the Scriptures is dismissed out of hand as either the knee-jerk reaction of ignorant “Bible thumpers” or the bald attempt by would-be theocrats to impose their religion on others.

Because we live in an increasingly post-Christian culture, one which makes implausible the idea that the Scriptures are sacred writings, serious and thinking Christians must have a robust understanding of why we believe the Bible is the Word of God.

So why believe the Bible? One way to answer that question is to ask the experts. You can find scholars who will tell you that all the evidence of history, archaeology, biblical studies, etc., point to this conclusion: the Bible is the Word of God. But, you can also marshal many other scholars who will claim that the evidence demands a different verdict: the Bible is the word of man.

The fatal flaw in this approach is that it does not deal with the Bible on its own terms. To answer the question, “Why believe the Bible?,” we must begin with… the Bible! And the Scripture’s testimony is more than clear – the Bible is God’s Word and therefore is authoritative and without error in all it intends to say. It is God’s revelation to man, a Word from our Creator on what we are to believe and how we are to live.

2 Timothy 3:16 says,  “All Scripture is breathed out by God and profitable for teaching, for reproof, for correction, and for training in righteousness” (ESV). The Greek word translated “breathed out by God” is theopneustos. “Theo” refers to God ( as in “theology”) and “pneustos” refers to breath (as in “pneumonia”). So the word literally means “God-breathed”. Although human beings wrote the Bible, the ultimate author of Scripture is God himself (2 Peter 1:21). Just as you “breathe” out your words when you speak, so God “breathed out” his words in the form of the Scriptures.

Now the obvious objection is, “Is this not circular reasoning? What kind of argument is this: the Bible is the Word of God because the Bible says it’s the Word of God?” There is no way to respond to this objection in a way that will completely satisfy the skeptic. The truth is, all of us – believer and unbeliever alike – base our thinking and reasoning on certain assumptions that we cannot “prove” to be true (i.e., can you “prove” that murder is wrong?). But the argument for the authority of Scripture does go beyond an appeal to mere words written on a page. Rather, the appeal is to the authority of God himself. We believe in the Bible because we believe in God, and we believe he has revealed himself to us by means of his Word. Therefore the authority of Scripture rests upon nothing less than the truth, character, and authority of God himself.

But if the Bible is self-authenticating (or rather, God-authenticated), and if the Bible’s own testimony is sufficient grounds for believing in it as the Word of God, then why doesn’t everybody believe? Because of sin. Sin not only manifests itself in our wrong behavior, but also in our wrong thinking. By nature, as sinners, we reject the light of God’s Word and we suppress the truth in unrighteousness (Rom. 1:18).

What this means is that belief or unbelief in the Bible is a profoundly moral matter. No one believes in the Scriptures as the Word of God purely on the basis that such belief is logical or reasonable (though it is, of course), but rather because such belief is right. To believe God’s Word is to honor, and submit to, to One who is the Creator and Lord of all. Unbelief is not an intellectual decision, but a dreadful moral failure (Titus 1:15).

By the same token it is right and good to believe in the Word of God. However, this belief is a gift of God’s grace. If you believe the Bible is the Word of God, then good, but don’t boast in your superior intellect or wisdom. Rather, give thanks to God that he would cause his light to shine in your heart (2 Cor. 4:6). Without the grace of God, you would not accept his testimony in the Scriptures; the Holy Spirit engenders such faith (1 Cor. 2:12). Just as you were saved by grace alone, so by grace alone you believe the Bible.

Christian, the Word of God is your foundation for faith and life, and it is the source of your every hope and comfort. No matter what the wise of the world may say, or no matter what the culture may value, you have a solid rock on which to stand. Don’t be ashamed to take your stand with the Scriptures, no matter what others may think. And don’t be swayed or intimidated by appeals to “scholars” who claim the Bible is only the words of men. Will you trust God or man?

In the Scriptures you have the revelation of a Savior who had mercy on you despite your natural unbelief and rebellion. The Scriptures are all about Jesus and you only truly believe the Bible as you are led by it to the the living Christ, the Savior of sinners (John 5:3, 40).