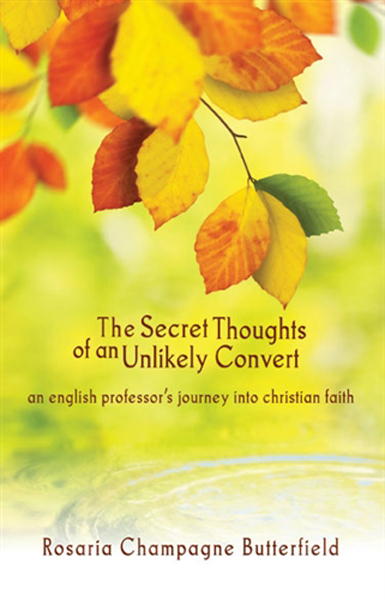 Would it be enthusiastic excess to say this book deserves a place next to Augustine’s Confessions for its intense spiritual drama, and for its profound theological insight into the experience of conversion to Christ? Maybe a little, but not much. This is a masterful account of God’s redeeming grace towards, humanly speaking, the most unlikely of sinners.

In her mid-30’s, then Rosaria Champagne was a tenured English professor at Syracuse University, a well-known gay activist, a Queer Theory scholar, a radical postmodern leftist, and generally the last person you’d expect to darken the door of a traditional Christian church. In her own words, “Friedrich Nietzche was kinder than I in his assessment that God is dead.”

The turning upside-down of Butterfield’s world began with a letter in 1999 from a local pastor, in which he neither lambasted nor praised her for her recent article criticizing Promise Keepers. Rather, he asked her simple questions about her “historical materialist” worldview that never before had she seriously considered. This pastor and his wife’s subsequent hospitality and friendship eventually led to Butterfield’s visiting his church, and finally to faith in Jesus Christ. She traces her Christian journey from that beginning to the surprising present, in which she is the wife of a conservative Presbyterian pastor (RPCNA) and a homeschooling mom of four adopted children. Quite a reversal for a woman who once howled and laughed with her lesbian friends at the idiocy of Christian married women and their pathetic lives and concerns (at least, as represented by a certain evangelical magazine)!

Butterfield writes at one point that she had read “too many cheesy Christian testimonies, all written in the past tense, all very simple, happy, and filled with more cliches than sugar in grandma’s cookies…” I can assure you, this is not one of them! Indeed, her opening line is: “How do I tell you about my conversion to Christianity without making it sound like an alien abduction or a train wreck?” For Butterfield, coming to faith in Christ meant a radical life change. No, “death” is a better word. She died to her lesbian identity, her gay community, her radical activism, and her professional and academic work (“This was my conversion in a nutshell: I lost everything but the dog.”). Here she describes how she felt after her public confession of faith at church:

I felt like I lived in some liminal invisible place, with no history and no sense of future. I felt like a vampire – possessing no reflection in mirrors. I realize now that this is what it means to be washed clean, to be truly made new again. The past really is gone. The shadow of what was remains, but the substance is truly taken away. (pg. 41)

With soul-baring honesty and a humorous touch (she keeps in view the sometimes comic irony of her unlikely conversion), Butterfield describes her frequently agonizing growth in grace as a new Christian in the months and years after her initial conversion. Her story is a realistic account of all that it means to be a follower of Christ in this world – the life-long journey of learning to hate one’s sin, to forsake idolatry, to trust at all times in God’s wisdom and goodness, to love the church, to lean on God’s people, and to learn and grow in faith.

And it all began as an intellectual upheaval. Any genuine conversion to Christ involves the intellect, but you will not find a more articulate description of that renewal of the mind the grace of God both demands of, and produces in, those who would be disciples of Christ. Butterfield came to faith in Christ as a scholar and a thinker, a highly trained reader of texts, conversant with the concepts of hermeneutics, worldview, and critical perspective. Thus, she is able to express what it means to think Christianly, to take every thought captive to Christ (2 Cor. 10:5). The spirit of Anselm infuses her meditations on the truth and grace of God: “For I do not seek to understand so that I may believe; but I believe so that I may understand. For I believe this also, that ‘unless I believe, I shall not understand'” (from Anselm’s Proslogion).

Every Christian should read this book. At our last session meeting, I recommended my elders to read it, though looking back I fear the overly-feminine book cover may work against my eager endorsement! Fellow Christian men, don’t let the dreamy picture on the front scare you. If you’re haunted by the fear someone may think you’re reading a Christian romance novel, buy the Kindle version. Trust me, gentlemen, there is some serious theology in these pages!

Butterfield’s thoughts and observations on homosexuality (and sexual sin in general), and on the gay community and lifestyle, are invaluable and ought to be reckoned with by every believer. She puts a human face on a people Christians too often demonize and caricature. Her best insight, I believe, is that homosexuality is not in itself the greatest of all sins, but that it is one particular manifestation of man’s pride and rebellion against God in which we all share. The very fact that Butterfield was reached with the gospel, and through the kindness and love shown to her by Christians, stands as a rebuke to us every time we write off homosexuals as somehow outside the possibility of God’s grace and worthy only of condemnation.

Another reason why Christians will profit from this book is Butterfield’s keen observation of the church and evangelical Christianity in general. Her unquestioning commitment to Christ and the church, along with her decade-plus experience as a believer, lends credibility to her sometimes critical scrutiny of the church. And her remembrance of what it is to be outside the Christian world looking in gives uncommon clarity to her observations. She is a thoughtful, independent (in the right sense), and fiercely intelligent commentator. You may not agree with all she says, but there is much to learn.

Also, her example as a Christian, and the example of her and husband together, is convicting and inspiring. I was truly humbled as she wrote about the joys and griefs they have shared in caring for and adopting sometimes difficult foster children. How many Christians are willing to go that far in showing the love of Christ to those in need? For all her book smarts, she has a heart for reaching flesh-and-blood people with the love of Christ.

But I also hope that many non-Christians will read this book. If you are not a believer I gently challenge you to wrestle with this question: why would someone like Butterfield, who had so much going for her, give it all up to become a Christian? What accounts for such a thoroughgoing transformation? My prayer is that you’ll see the answer Butterfield gives: it was a supernatural work of God’s power and grace to bring her to faith in Christ, and to compel her to take up his cross and follow him.

Butterfield’s writing is engaging, warm, and at times poetic – just what you would expect from an English professor! She is a worthy scribe to put into words what must be, at the end of the day, humanly inexpressible: the grace of God as he, in a love as mysterious as it is powerful, called to himself one hopelessly lost sinner, bringing her home to him, to forgiveness, and to eternal life. Butterfield’s story is remarkable because through it shines the grace of God.