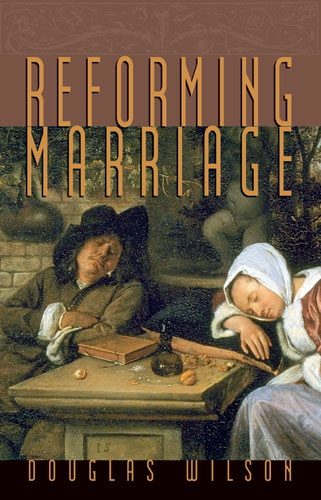 Robyn and I first read Reforming Marriage as newlyweds, or maybe while we were engaged. I can’t remember now, but I do recall finding this book on marriage a useful guide to the biblical teaching on the subject. And having recently began pre-marital counseling with a certain couple, and having asked them to read the book, I thought it would be wise to go through it again.

I still find this a clearly-written and overall helpful book on marriage. I recommend it with only a few reservations. The book’s greatest strength is the clear and lucid presentation of the Bible’s basic teaching on marriage. Wilson does not pussyfoot around that teaching which so many in our culture find quaint at best, and misogynist at worst. If you’re unpersuaded, or offended, by the Scriptures’ unambiguous statements concerning the husband’s and wife’s respective roles within marriage, you’ll find much of this book unpersuasive or offensive, as well. The Bible teaches that men and women are equal in dignity and worth in the sight of God (Genesis 1:27; Galatians 3:28), but at the same time in the marriage relationship there is a structure of authority. The husband is the head of his wife (1 Corinthians 11:3; Ephesians 5:23) , and the wife is under his headship. Husbands are to love their wives (Ephesians 5:25, 28; Colossians 3:19), and wives are to respect, and submit to, their husbands (Ephesians 5:22; Colossians 3:18; 1 Peter 3:1). That’s the Bible’s instruction on each party’s role within marriage, and Wilson builds much of what he says on this teaching.

In the process, he brings some helpful insights into his discussion. For example, he notes there is a difference between a command that the husband be the head of the wife, and a statement of fact the husband is the head of the wife. The Bible says the latter, not the former: God created marriage so that, in truth, the husband is the head, he is the leader. Wilson calls this his “inescapable headship” (pg. 23). And the significance of this truth is that no matter what the husband does, he will profoundly impact his wife, for weal or for woe, because he is the leader in their relationship. He puts it well when he writes:

If a husband tries to run away from his headship, that abdication will dominate the home. If he catches a plane to the other side of the country, and stays there, he will dominate by his absence. How many children have grown up in a home dominated by the empty chair at the table? (pg. 24)

Wilson goes on to show how, since this is the case, the health of the marriage relationship depends disproportionately upon the husband. And so he stresses the husband’s responsibility for the well-being of the marriage relationship. Another insight emerging from this is Wilson’s observation that many Christian men have abdicated their responsibility to lead their wives as they ought. While some do this from harshness (which the Bible, and Wilson condemns), the greater problem among Christians is what he labels “The Nice-Guy Syndrome.” The problem with these “nice-guys” is they are decent people, even to their wives, but they provide no true moral and spiritual leadership for their spouses. They have abdicated their basic duty to love their wives, with all that that means. And the wife and the marriage suffer for it.

Another useful insight Wilson provides is that the marriage of a man and a woman will, because it is based on the relationship between Christ and his bride (the church), say something, either true or false, about the gospel (Ephesians 5:25-32). A faithful Christian husband, by his self-giving and self-denying love for his wife, testifies to the world that Christ loves his people in this way. And the opposite is true, too: a husband proclaims falsehood about Christ and his love for the church when he fails to love his wife as he should.

Wilson includes some reliable counsel on the sexual relationship in marriage, on finances, the question of birth control, and the issues of divorce and re-marriage. As for the last, he follows the standard Reformed teaching on biblical grounds for divorce, but adds the (novel, I think) idea that a divorce can be justified in cases when one party has committed a sin so heinous it would be worthy of capital punishment in the Old Testament. I found this reasoning a bit strained (and question the hermeneutical principle undergirding it).

For the most part, Wilson’s marriage counsel is solid. He straightforwardly explains the Bible’s teaching, in a thought-provoking but lively manner, with some humor thrown in just for fun. A Christian couple would do well to read this book, especially if they are having marriage problems.

As for my reservations, I would tell people to read the book with some discernment. At times, Wilson makes some sweeping statements that may or may not be true (for example, his analysis of feminism on pg. 32 – whether he’s right or not, it’s a distraction). Also, Wilson’s call to Christian men to pursue a more biblical ideal of masculinity, and of marriage and family in general, is definitely warranted. However, that does not mean the result will look exactly as Wilson describes it in the Epilogue. The author makes his points clear, but is given to overstatement at times.